The White House is the official residence and principal workplace of the President of the United States. Located at 1600 Pennsylvania Avenue NW in Washington, D.C., it was built between 1792 and 1800 of white-painted Aquia sandstone in the late Georgian style and has been the residence of every U.S. President since John Adams. It was designed by Irish-born James Hoban. When Thomas Jefferson moved into the home in 1801, he (with architect Benjamin Henry Latrobe) expanded the building outward, creating two colonnades which were meant to conceal stables and storage.

Congratulations on your autumn holidays!!!! Enjoy this beautiful song.

Iviron is the name of the monastery on Mount Athos where the icon was from 999. According to church tradition, this icon was of the type painted by the Apostle and Evangelist Luke on a table which, The Lord Himself, The Theotokos, and Saint Joseph had their meals. This icon is of the Hodegetria type from the Greek meaning Pointer of the Way and is usually depicted with the Christ Child in Her arms giving His blessing. This icon is a prototype of an icon that according to tradition holds that during the iconoclastic controversy in the 9th. Century, a widow from Constantinople hid the icon in her home to preserve the icon from destruction. Fearing that she would be caught she placed it in the waters at Nicea where it eventually was found floating in the sea near Mount Athos. It was found by the monks from the Iviron monastery on Mount Athos and placed there. A copy was made and sent to Russia in 1648, where a chapel was built for it. Almost immediately this copy became highly venerated because of the many miracles which have been attributed to it. The feast day of this icon is February 12, the day on which it appeared to the monks at Mount Athos and on October 13 to commemorate the replicas arrival in Russia on that day. This icon is also referred to as the Iberian and Iverskaya icon as well.
Source
Автор: Светлана Кирсанова на 18:32 Комментариев нет:

Wren was born at East Knoyle in Wiltshire, the only surviving son of Dr. Christopher Wren (1589–1658), at that time the rector of East Knoyle and later Dean of Windsor.
As a sickly child, Christopher Wren would survive into robust old age. He was first taught at home by a private tutor and his father. After his father's appointment as Dean of Windsor in March 1635, his family spent part of each year there and of course the contacts with Royalty helped. He was at Westminster School from 1641 to 1646 some of his youthful exercises preserved or recorded showed that he received a thorough grounding in Latin; he also learned to draw and was "initiated" in the principles of mathematics by Dr William Holder, who married Wren’s elder sister Susan. During this time period, Wren manifested an interest in the design and construction of mechanical instruments.
Read more
Автор: Светлана Кирсанова на 22:47 Комментариев нет:

Jonathan Swift was born on 30 November 1667 in Dublin, Ireland; the son of Protestant Anglo-Irish parents Abigail Erick [Herrick] (c1642-1710) and Jonathan Swift (1667-1745) an attorney at King's Inn, Dublin, who had died seven months before his son was born. Young Jonathan was a sickly child, and it is said he later developed Meniere's Disease, which affects the inner ear and causes dizziness, vertigo, nausea, and hearing loss.
Читаем дальше?
Автор: Светлана Кирсанова на 12:57 Комментариев нет:

In this place, Sitka, Alaska, on October 18, 1867, the great land of Alaska was transferred from Russia to the United States.
The Russian Double Eagle was lowered for the last time, and the Stars and Stripes made their first appearance over Alaskan soil in a ceremony formalizing the transfer of the territory of Alaska from Tsarist Russia to the United States of America at the incredible purchase price of approximately two cents per acre.
The first recorded celebration of Alaska Day, in 1949, was highlighted by the unveiling of the bronze statue of "The Prospector" on the lawn of the Pioneer's Home. Molded by sculptor Alonzo Victor Lewis is the image of William Fonda, better known as "Skagway Will", the two-ton statue is a tribute to Alaska's pioneers.
Read more
Автор: Светлана Кирсанова на 19:54 Комментариев нет:

Wilde was an Anglo-Irish novelist, playwright, poet and critic, and a celebrity in late 19th century London.
Oscar Fingal O'Flahertie Wills Wilde was born in Dublin on 16 October 1854. His father was a successful surgeon and his mother a writer and literary hostess. Wilde was educated at Trinity College, Dublin and Magdalen College, Oxford. While at Oxford, Wilde became involved in the aesthetic movement. After he graduated, he moved to London to pursue a literary career.
Here's my presentation - a mix of photos I've made being in Dublin in 2012:
Oscar wilde in dublin from Svetlana Kirsanova

National Boss Day is October 16 each year. When the holiday falls on a weekend, it is generally celebrated on the working day closest to October 16.
National Boss Day offers employees an opportunity to recognize those in supervisory positions. Popular ways to say "thanks" include cards, a lunch in the boss's honor, flowers, or gift certificates.

National Boss Day was started in 1958 when Patricia Bays Haroski, then an employee at State Farm Insurance Company in Deerfield, Ill., registered the holiday with the Chamber of Commerce of the United States. She designated October 16 as the special day because it was her father's birthday. Ms. Haroski's purpose was to designate a day to show appreciation for her boss and other bosses. She also hoped to improve the relationship between employees and supervisors. She believed young employees often do not realize the challenges bosses face in running a business.
Source
Автор: Светлана Кирсанова на 19:51 Комментариев нет:

14 October - The Intercession of the Theotokos

Columbus Day, which is annually on the second Monday of October, remembers Christopher Columbus' arrival to the Americas on October 12, 1492. This holiday is controversial because the European settlement in the Americas led to the demise of the history and culture of the indigenous peoples.
What do people do?
Officially, the people of the USA are invited to celebrate the anniversary of the discovery of their country with church services and other activities. In some towns and cities, special church services, parades and large events are held. Most celebrations are concentrated around the Italian-American community. The celebrations in New York and San Francisco are particularly noteworthy. In Hawaii Columbus Day is also known as Landing Day or Discoverer's Day.
Not all parts of the United States celebrate Columbus Day. It is not a public holiday in California, Nevada and Hawaii. Moreover, Native Americans’ Day is celebrated in South Dakota, while Indigenous People’s Day is celebrated in Berkeley, California. 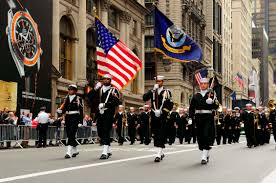 9 October - The Apostle and Evangelist St. John, called the Theologian

The Apostle and Evangelist St. John, called the Theologian, was the son of Salome and Zebedee. Zebedee was a fisherman of Galilee who possessed rather vast holdings with workers. He was a member of some importance in the Jewish community, having access to the high priest. John's mother Salome is mentioned as being one of the ranks of women who served God with their possessions.
John was at first the disciple of St. John the Baptist. Listening to his witness of Christ as the Lamb of God Who takes away the sins of the world, he, together with Andrew the First-Called, followed the Saviour.

9 October 1940 – Birth of John Lennon , English singer, songwriter, musician, and the dominant personality of the Beatles.

John Winston Lennon was born in Liverpool, England on October 9, 1940 during a blitzkrieg attack by the German Luftwaffe. His parents were Julia and Arthur "Freddie" Lennon, and the middle name of "Winston" was given to John in honor of Winston Churchill. Alfred was in the merchant marine and was largely absent from Lennon's early years, although he reappeared after the Beatles had become mega-famous. By 1944, Julia was pregnant with another man's baby, and Julia's sister Mimi threatened to call Social Services unless John was handed over to her care. John lived with his Aunt Mimi and her husband, George Smith, until his late teens. (His childhood home at Mendips on Menlove Avenue, where he lived with his Aunt Mimi, can be seen in the photograph below.) It was George Smith who gave John his first harmonica.
Read more
Автор: Светлана Кирсанова на 20:25 Комментариев нет:

World Smile Day celebrates the ever popular yellow smiley. It also offers us an opportunity to do an act of kindness. According to the World Smile Day website, a proclamation of this day was made by the U.S. Congress. Now that should put a smiley on your face.
The smiley face became so popular, that the U.S. Post Office issued a stamp with the smiley face.
The intent of World Smile Day is to do an act of kindness, or help one person to smile. Why not do both!?
The yellow smiley stands brightly smiling upon this day, offering it's stamp of approval.

About the Smiley Face:
Harvey Ball, a commercial artist from Worcester, Massachusetts created the smiley face in 1963. The State Mutual Life Assurance Company hired Harvey as a free lance artist to create a smiley face for use in improving company morale. From there, the bright and cheerful smiley grew in popularity. It's popularity grew slowly at first. Then, it exploded in the 1970's. Ultimately, the smiley became wildly popular.
There is some controversy over the smiley's creation. French entrepreneur named Franklin Loufrani claimed to have invented it in 1968. In 1971 he patented it in 80 countries.
Source
Автор: Светлана Кирсанова на 16:29 6 комментариев: