Among the outstanding figures of Ancient Rus, one that doesn't fade from the Russian people's memory is Alexander Nevsky, for even today he is honoured as a prominent statesman, talanted military commander and great patriot. As if in compensation for his short life - the Prince died at the age of forty-three at the hight of his power - fate early bestowed upon him maturity and responsibility.
Alexander Nevsky was born on May 30 (June 12 - new style), 1220, in Pereslavl-Zalessky, a town in Northeastern Russia which is 124 kilometers from Moscow, on the shore of Lake Pleshcheyevo. His father was Prince of Pereslavl-Zalessky, Yaroslav Vsevolodovitch, a son of Prince Vsevolod Big Nest (called so for his large family and, more than likely, for the enormity of the territory he ruled), a grandson of Prince Yuri Dolgoruky (the famous founder of Moscow), a great-grandson of Prince Vladimir Monomakh. His mother was Princesss Feodosiya Igorevna, a daughter of Prince of Ryasan, Igor Glebovitch. Alexander was the second son in the family of Prince Yaroslav Vsevolodovitch. 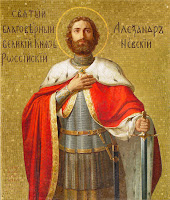 Alexander Nevsky's lifetime coincided with the epoch of declination of the Kievan state which was disastrous from a military and political point of view. In the second half of the 12th century, Kievan Rus broke up into a multitude of independent principalities which were weakened by internecine strife as well as by foreign invasions. Northeastern Rus never became the strong, unified state that existed during the reign of Yaroslav the Wise (1019-54). This was due chiefly to the grave misfortune suffered by the vast Russian lands which, with the exception of Novgorod and Pskov, were conquered by the Tatar hordes in 1237-38. Despite the heroic resistance of the people, the devided lands were unable to turn back the invasion, and the Tatar Yoke (the reign of the Golden Horde) thwarted the development of the national economy and culture.
In 1228 Alexander together with his father Prince Yaroslav Vsevolodovitch and his elder brother Fyodor Yaroslavitch came to Novgorod the Great where the young princes were soon nominated vicegerents of the city. In 1233 Fyodor Yaroslavitch died, leaving Alexander the only ruler of Novgorod.
During the winter of 1234 young prince Alexander led his first military campaign (together with the troops of his father Yaroslav Vsevolodovitch) against the German Knights of the Livonian Order.
In 1238 Yaroslav Vsevolodovitch became Great Prince of Vladimir, whereas his son Alexander - Prince-Vicegerent of Novgorod the Great, Prince of Dmitrov and Tver.
In 1239 Prince Alexander contracted matrimony with Princess Alexandra, a daughter of Bryachislav, Prince of Polotzk. This year must be also marked as the starting point of the Prince Alexander's activity in constructing defensive fortifications; the first ones built by his order were fortresses and defensive line along the Shelon River and the southwestern frontier of the Novgorod principality.
In July 1240, the Swedes, Norwegians and Finns undertook their joint crusade against Novgorod approved by Pope Grigory IX. On July 15, 1240, the Russian troops led by twenty-year-old Prince Alexander gained a shattering victory over the crusaders on the Neva River, not far from its confluence with Izhora. In honour of this victory Prince Alexander was called "Nevsky" and "Khrabry" ("the Valiant").
In 1241, Prince Alexander and his Novgorod army banished the German Knights from Koporye and Pskov, the Koporye fortress being levelled to the ground. On April 5 (18), 1242, the famed Battle on the Ice at Lake Chudskoye between the Russian troops and the German Knights of the Teutonic Order took place. The brilliant victory of Alexander Nevsky and his army over the Knights put an end to German expansion to the East. In this very year Prince Alexander concluded peace with the Order and issued the Pskovian Legislative Statute. In 1245 Prince Alexander successfully repulsed numerous raids of the Lithuanians on the Russian lands of Smolensk, Vitebsk, Novgorod and Pskov. In 1247, after his father's death, Prince Alexander assumed posession of several towns and principalities, including that of Pereslavl and Zubtzov, but Novgorod remained his main seat.
In 1248, Novgorod, the seat of Alexander, was visited by legates of Pope Innocent IV with a special papal charter addressed to Prince Alexander and a proposal to conclude an alliance. The visit turned unsuccessful as Alexander rejected the proposal.
During the years 1249-52 Prince Alexander had to visit Saray-Batu (Ak-Orda) and Karakorum (Mongolia) on the Tatar khans' summons. Due to his military victories, state and diplomatic talent, Alexander Nevsky made the Golden Horde reckon with him. As a result, he received there a special yarlyk (right to reign) over "Kiev and whole Rus" and became the Great Prince of Vladimir. Thus he began to restore Russian cities and lands ruined in the course of the Tatar invasion (1238-52). In 1252 Alexander also contracted his second matrimony (Princess Alexandra died in 1251) with Princess Darya Izyaslavna, the daughter of Izyaslav Vladimirovitch, Prince of Ryazan.
Year 1254 was marked for Prince Alexander and whole Russia by concluding peace with Norway, and in 1262 Alexander Nevsky concluded peace with the Great Principality of Lithuania.
In 1262-63 Prince Alexander Nevsky set out on his last mission to the Horde to save his lands from the revenge of the Tatars for the uprising of 1262 against their tribute collectors. Having fulfilled his obligation, he died on the way back home in Gorodetz on 14 November 1263. "The Sun of the Russian lands has set", said the chronicles of this loss. Not long before his death Alexander Nevsky took the scheme (monastic habit) and the monastic name of Alexius. He was buried on November 23, 1263 in Vladimir.
447 year later, in 1710, the Alexander Nevsky Monastery was founded in St Petersburg by Peter I's decree. In 1723-24 relic of St Prince Alexander Nevsky was transfered from the town of Vladimir to the Alexander Nevsky Monastery in St Petersburg.
In 1725, there was established the Order of St Alexander Nevsky, one of the highest military honours in Russia.
In 1797, the Alexander Nevsky Monastery was given the status of Lavra. During World War II, on 12 September 1943 the Soviet Order of Alexander Nevsky, presented to over forty thousand Soviet officers, was established. On June 3, 1989, the second transference of St Prince Alexander Nevsky's relic from an anti-religious museum to the St Trinity Cathedral of the Alexander Nevsky Lavra was undertaken.
April 18, 1995 is the date of the first official celebration of the Day of Victory in the Battle on the Ice at Lake Chudskoye won by Alexander Nevsky and the Russian warriors over the German Knights of the Teutonic Order (in accordance with the Federal law №32-fl passed on 13 March 1995). 2000 - the All-Russian festivity "The Alexander Nevsky's Wreath of Glory".
Source
Автор: Светлана Кирсанова на 18:44