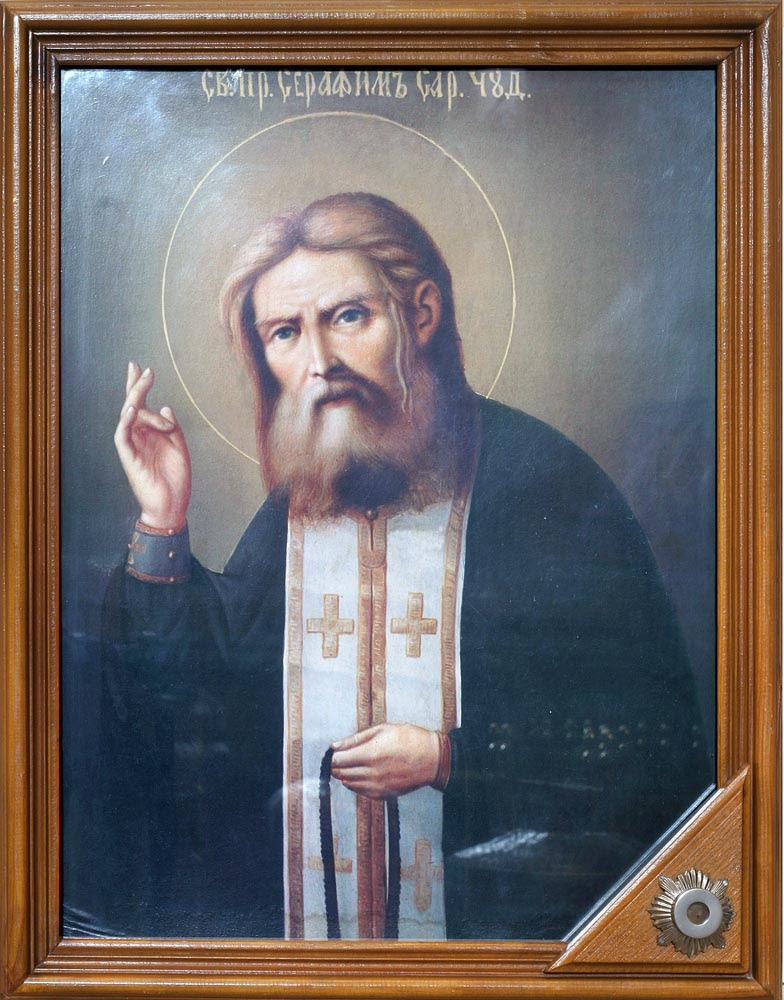 Our Righteous Father St. Seraphim the Wonderworker was born in the town of Kursk, Russia in 1759. In 1825, the Most holy Theotokos appeared to the Saint. This good soul and servant of our Lord fell asleep in the Lord on January 2/15, 1833. In Sarov on July 19/August 1, 1903, he was canonized a saint and in the year of 1903 and in the year 2003 will be the One Hundred Anniversary of his holy canonization. It was the Royal Martyrs Tsar Nicholas, and Tsarina Alexandra of Russia who promoted the idea of the act of Holy Canonization to the Synod of Bishops and as well attended the services of Canonization. While St. Seraphim lived many miracles took place, and many people found God once again, as well where healed from sickness, all because of the prayers of this loving Saint. Even after St. Seraphim reposed in the Lord miracles continue to happen until this day.


The feast day in the Orthodox Church for St. Seraphim is on January 2/15, and as indicated the day of his holy canonization (also known as the Uncovering of the Holy Relics of Our Righteous Father Seraphim of Sarov) remembered on July 19/August 1.

Many newly baptized Orthodox Christians have taken the name of the Seraphim after the angels which are called the "Seraphim", and even those who have become monks and nuns: Seraphim (male), and Seraphima (female).
From very early childhood St. Seraphim lived like a saint, even as he spent his young childhood growing up in a Russian town, and at first when he was born his name was Prochorus. As Prochorus grew up and eventually became a monk he took the name Seraphim, (when a person becomes a monk his named is changed) and was noted throughout the Russian land as Father Seraphim.

Now lets get back to the young life of this wonderful saint when he was young. Miracles happened to him, and once, when he was seven years old he climbed with his mother to the very top of a high bell tower. Like all boys, he wanted to learn over the edge to see as far as he could. The countryside with all its villages and churches and streams and little specks of cows lay like a carpet at his feet, and he leaned out father and father until suddenly he fell headlong off of the edge of the tower! His horrified mother rushed down the steps, thinking that he was surely dead, but when she reached the ground, she was amazed to find him standing on his feet, without a scratch, as if holy Angels had caught him when he fell!

At the age of 18 years old Prochorus decided to become a monk, later, and a new name was given to him since when a person either becomes a monk or a nun a new name is given a new name and now his new name was Seraphim, and was known by many Orthodox Christians as Father Seraphim.

Every person who becomes a monk loves to pray, and Father Seraphim knew how powerful prayer was, so he decided to pray with all his strength. For many years he lived with his brother monks in the monastery, but later he went with a blessing to stay in a small cabin he had built for himself in the woods so that he could pray all the time. The thing about prayer is that the more you pray, the more you want to pray, and St. Seraphim once prayed kneeling on a rock for a thousand days and nights! While he was on this rock he said a certain prayer, which is known in our Orthodox Church as the Prayer of the heart, and also known as the Jesus Prayer. And this is the prayer: Lord, Jesus Christ, Son of God, have mercy on me a sinner! This beautiful prayer eventually enters the heart after saying it for so long, and in doing this prayer one uses a prayer rope with so many knots -some thirty knots, and some one hundred knots on the prayer rope. So over and over again Father Seraphim said this prayer while praying on the rock, not at all worried about the pain in his knees or even worried about food, or even to take some rest.

So, we might ask, what did St. Seraphim accomplish by kneeling on this rock? While St. Seraphim prayed on the rock on his knees lifting up his hands to God, he received the greatest of all gifts of all, the Holy Spirit! His soul became as pure and white as snow, so pure that the Holy Spirit came to live in his heart, and he was full of love - love for God, for his neighbors, and even for all the animals. St. Seraphim loved God so much that the animals felt a peace when they came near him, why even a big bear was able to walk up to him and eat from his hands. He was like during the times of Adam in Paradise before the fall, and even the beasts of the forested trusted him. You seen, animals haven't completely forgotten Paradise (as have some people), and they still recognize real goodness. We still have good people in the world. That is why we should be good too.

Many people began to visit St. Seraphim especially those who had great sicknesses and where filled with sorrow -sadness. He would teach them how to pray and how to love our God. When the people asked him how they could help their neighbors he replied, "Acquire the spirit of peace, and thousands around you will be saved." What St. Seraphim really meant was that when you have the peace of our God in your heart, everyone will see it and want to have it for them. One time St. Seraphim's friends saw him shining as brightly as the sun, and putting out such heavenly warmth that, although they were sitting on a log in the snow, they weren't a bit cold!

St. Seraphim loved especially children. When the children would come to see him they would say: "Batushka! Batiushka!" This meant little Father. Yes see St. Seraphim was called Father Seraphim since he was a monk and a priest. Monks are also called Father and when a monk becomes a priest he is also called Father. The custom loved way in expressing Father when some one called a priest "Batuhska" in Russia; it was a way of expressing as a deep respect. When St. Seraphim heard these words he would come to greet the children. This saint had such great love for everyone that when he would greet them he would say: "My Joy" and to everyone he would say no matter what time of the year it was, "Christ is Risen!"

Let us ask St. Seraphim to pray for us all, not only all children, but also for our parents, even our friends, and our neighbors.
Holy St. Seraphim, pray to God for us!
Автор: Светлана Кирсанова на 13:20