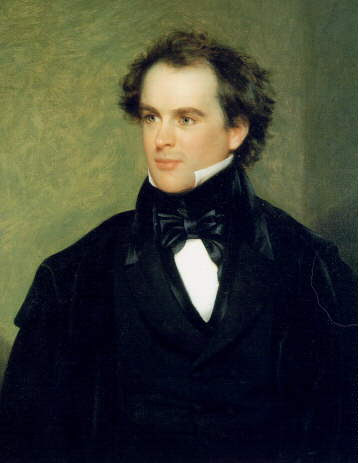 Nathaniel Hawthorne was born on July 4, 1804, in Salem, Massachusetts, a descendant of a long line of Puritan ancestors including John Hathorne, a presiding magistrate in the Salem witch trials. In order to distance himself from his family's shameful involvement in the witch trials, Hawthorne added the "w" to his last name while in his early 20s. Also among his ancestors was William Hathorne, one of the first Puritan settlers who arrived in New England in 1630.


After his father, a ship captain, died of  yellow fever at sea when Nathaniel was only four, his mother became overly protective and pushed him toward relatively isolated pursuits. Hawthorne's childhood left him shy and bookish, which molded his life as a writer.


Hawthorne turned to writing after his graduation from Bowdoin College. His first novel, Fanshawe, was unsuccessful and Hawthorne himself later disavowed the work as amateurish. He wrote several successful short stories, however, including "My Kinsman, Major Molineux","Roger Malvin's Burial", and "Young Goodman Brown" - arguably Hawthorne's most famous short story. Despite the critical acclaim it has received since, Hawthorne twice rejected this work when asked to select a compilation of short stories for publication.
His insufficient earnings as a writer forced Hawthorne to enter a career as a Boston Custom House measurer in 1839. After three years Hawthorne was dismissed from his job with the Salem Custom House. By 1842, his writing finally provided him income sufficient enough to marry Sophia Peabody and move to The Manse in Concord, which was the center of the Transcendental movement.
The couple had three children. Una, the eldest, was born in 1844 and named in reference to Sir Edmund Spenser's epic poem The Faerie Queene. Their second child, a son they called Julian, was born in 1846. The third child, Rose, was born in 1851 and referred to by Hawthorne as his "autumnal flower".
Hawthorne returned to Salem in 1845, where he was appointed surveyor of the Boston Custom House by President James Polk, but he was dismissed from this post when Zachary Taylor became president. Hawthorne then devoted himself to his most famous novel, The Scarlet Letter. He zealously worked on the novel with a determination he had not known before. His intense suffering infused the novel with imaginative energy, leading him to describe it as a "hell-fired story". On February 3, 1850, Hawthorne read the final pages to his wife. He wrote, "It broke her heart and sent her to bed with a grievous headache, which I look upon as a triumphant success."
The Scarlet Letter was an immediate success that allowed Hawthorne to devote himself completely to his writing. He left Salem for a temporary residence in Lenox, a small town in the Berkshires, where he completed the romance The House of the Seven Gables in 1851. While in Lenox, Hawthorne met with Herman Melville and became a major proponent of Melville's work, but their friendship later became strained. Hawthorne's subsequent novels, The Blithedale Romance - based on his years of communal living at Brook Farm - and the romance The Marble Faun were both considered disappointments. Hawthorne supported himself through another political post, the consulship in Liverpool, which he was given for writing a campaign biography for Franklin Pierce.
In 1852, after the publication of The Blithedale Romance, Hawthorne returned to Concord and bought a house called Hillside, owned by Louisa May Alcott's family. Hawthorne renamed it The Wayside. He went on to travel and live in France and Italy for a spell, but he returned to The Wayside just before the Civil War began. He published an article entitled "Chiefly About War Matters" for the Atlantic Monthly just before he fell ill, detailing the account of his travels to the Virginia battlefields of Manassas and Harpers Ferry and to the White House.
Hawthorne passed away on May 19, 1864, in Plymouth, New Hampshire, after a long period of illness during which he suffered severe bouts of dementia. By this time, he had completed several chapters of what was to be a romance, and this work was published posthumously as The Dolliver Romance.
Hawthorne was buried in Sleepy Hollow Cemetery in Concord, Massachusetts. Transcendentalist poet and essayist Ralph Waldo Emerson, a neighbor of Hawthorne's, described the life of his acquaintance as one of "painful solitude." Hawthorne had maintained a strong friendship with Franklin Pierce, but otherwise he had had few intimates and little engagement with any sort of social life.
A number of his unfinished works were published posthumously. His works remain notable for their treatment of New England Puritanism, personal guilt, and the complexities of moral choices. Though Hawthorne was perpetually dissatisfied with his body of work throughout his life, he remains lauded as one of the greatest American writers.
Автор: Светлана Кирсанова на 13:17