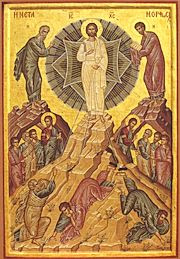 Jesus’s Transfiguration is the event in which the Jesus was transfigured upon a mountain. It was on 19th of August that this mournful even took place and the world was astonished to see the transfiguration of the Jesus. Jesus became glowing and spoke to Moses and Elijah (very important figure of the Judaism) and was called Son by God. Those, who show this incident, was asked by the Jesus not to reveal about the even to anyone until he rises in the cross and that would be done on the third day of his death.

Jesus’ Transfiguration is not very easy thing to be accepted by the people. When Jesus went up the mountain, he was not alone but he took Peter, James and John along with him. They were the three before whom the Jesus was transfigured. As soon as this took place the cloth the Jesus was wearing soon got changed to a dazzling white and very soon the two very popular figures of the Judaism Moses and Elijah appeared in front of him.
Peter spoke and asked if he could put shelter for all the three but in no time the cloud appeared and surrounded them, a voice came from this cloud which spoke “This is my beloved Son, in whom I am well pleased. Listen to him.” After that, all of a sudden when Peter and all looked around they could only see Jesus and no one else. Jesus told them not to say about this happening to anyone until he rose from the death.
Why this Transfiguration did take place? This Transfiguration was mainly done to provide strength to Jesus for his long journey to Jerusalem and the cross. Jesus was not afraid of death or resurrection, as it was after death it is transformed into victory over sin and the grave.
Transfiguration of Jesus brought about a great change in the focal point of Luke’s Gospel from Jesus’ preparation. The mountain, thus, becomes a symbol for God. There is a belief among the people that if they become divine, then they can be God. However, it is not so to remain as a human being and then being transfigures is like filling one life with the divine light.

This day is one of the major festivals for the Eastern Orthodox churches. Jesus’s Transfiguration on 19 August every year is celebrated in all churches by lighting candles, making altars and many more. On this day, churches are decorated very beautifully and all come and pray and ask God to help them in their life. This day is the day when Jesus had given up his life for the good of the human beings. It thought us and gave inspiration on how to come out from the difficult situation. It is a very memorable day; a day when Jesus had revealed himself in front of the Peter, John and James. In some of the Armenian Churches, this is celebrated for a continuous three days preceded by a six day fast. Different church makes this day especially differently.
Source
Автор: Светлана Кирсанова на 20:40