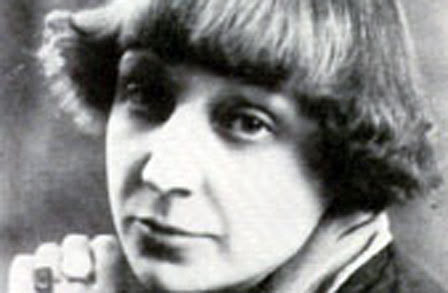 Marina Tsvetaeva was born on 1892 in Moscow, Russia. She was a well-known poet in Russian, considered as one of the greatest and most original Silver Age poets of the 20th Century, even though her work did not gain international visibility.

Tsvetaeva spent her childhood and early youth in Moscow where her mother discouraged her early efforts in poetry and wanted Tsvetaeva to become a pianist instead. After her mother's death, at the age of 16, she went to Paris to study literary history at the Sorbonne. Her first poetry book, Evening Album, came out in 1910 and attracted the attention of Maximilian Voloshin, a Russian critic and poet that later became her mentor and friend. It was in Voloshin's home, in the Black Sea, that she met her future husband Sergei Yakovlevich Efron, at the age of 19. They married in 1912 and from then on Tsvetaeva is known to have had plenty of affairs including fellow poets Osip Mandelstam and Sofia Parnok, affairs that inspired her writings as in the collection Milepost (in relation to Osip) and a cycle of poems entitled initially The Girlfriend and laterThe Mistake (in relation to Sofia).


The times of the Russian Revolution were troublesome for Tsvetaeva, her husband Efron and their two daughters. Efron volunteered to the front in 1914 and after the revolution, joined the White Army. Tsvetaeva was trapped in Moscow and thrown into extreme poverty for five years. She even sent one of her daughters to a state orphanage hoping for a better life condition but her daughter starved to death. After this tragedy she decided to emigrate to Berlin where she published the poem The Tsar Maiden and the collections Poems to Blok and Separation. From Belin they went to Prague where once again they struggled to survive and where Tsvetaeva had an affair with a former military named Konstantin Rozdevitch, an affair which became known through the emigré circles and even by Efron himself, who was devastated by it. The end of this affair was most likely her inspiration for The Poem of the End, one of her greatest works. After moving to the suburbs, Tsvetaeva had yet another child, a boy this time, that proved to be a very difficult child.

In 1925, after 6 years of moving about, the family finally settled in Paris, where they stayed for the following 14 years. At this time Tsvetaeva started writing prose as well, in an attempt to make a bit more money out of her work, and Efron contracted tuberculosis. In Paris her work was not very well received in the emigré circle for it was seen as not enough anti-Soviet despite her support for the White Army during the revolution. She had difficulties getting her works published but kept a lively correspondence with other writers including Rainer Maria Rilke, Boris Pasternak and Aleksandr Bakhrakh. In 1937 Efron and their daughter returned to the Soviet Union as Efron was working as a spy for the NKVD and has been charged with murder by the french police in Paris. Tsvetaeva was questioned about the murder but seemed not to understand what the questioning was about and instead read some french translations of her works to the bewildered police officers. She seemed not to have known much about her husband's activities but was nevertheless further excluded from the Parisian emigré circle and felt she had no other choice but to return to the Soviet Union.
When arriving back in the Soviet Union in 1939 with her son, Tsvetaeva encountered a changed country. There was no longer space for anyone who had lived abroad as they were all suspects. Her poetry was not well taken by the Bolshevik regime either and she found no where to go, no work to do apart from few translations. In 1941 her husband was shot on the charged of espionage and her daughter sent to a labor camp. In the same year, with the evacuation of Moscow, Tsvetaeva was sent to Yelabuga (while most poets where sent to Chistopol) where she found herself once more desperately looking for work until her suicide on August 31, 1941. No one attended the funeral and the location of her grave is unknown. There are museums in her homage in Yelabuga, where her suicide note can be seen, and in Moscow, where a bronze monument was installed in 2007, commemorating her 115th anniversary.
Tsvetaeva is know for bridging two different and contradictory strands of Russian poetry namely Symbolism and Acmeism. While Symbolism was busy with getting away with real depictions of daily life in name of evoking feelings, Acmeism (coming from the greek acme meaning the best age of man) was busy with de-linking poetry from mysticism concentrating in craft and cultural continuity. Her poetry mostly developed around the world of female sexuality and emotions. Her writings are considered as very disciplined and eccentric in the use of language, and her themes as arousing from her troubled life and personality. She always dated her poems and constructed them in cycles which facilitates the study of her oeuvre. There are 10 collections of her lyric poetry and her uncollected poetry could as well fill another 10 volumes. One of her best-known and exemplary poem is the 1922 The Tsar Maiden which is a long verse form of a fairy tale with the famous lines:
I am nowhere.
I've vanished in no land.
Nobody catches up with me.
Nothing will bring me back.


In her poetry, Tsvetaeva made use of completely different characters such as mythological, biblical, folkloric and historic ones. She became known for her ability to personify different characters within her poetry. Tsvetaeva constantly made use of paradoxes, inviting the reader to search through the uncertainties of truths. Her style is described as aphoristic and she is primarily seen as a lyrical poet. Her poetry is also known as very passionate with an almost obsessive quality when it came to her beloved ones. Since the 1960s her work started to reappear in new editions which brought her to light as one of the greatest Russian poets of the 20th Century. The long years of obscurity seemed to have been already foreseen by Tsvetaeva as in her lines:
Amidst the dust of bookshops, wide dispersed
And never purchased there by anyone,
Yet similar to precious wines, my verses can wait
Its time will come.


Tsvetaeva's work was cheered and admired by many poets of her time including Rainer Maria Rilke, Boris Pasternak, Osip Mandelstam, Valery Bryusov, and Maximilian Voloshin amongst others. One of the best and most famous descriptions of her work is the one given by the Russian-American poet and essayist Joseph Brodsky:
Represented on a graph, Tsvetaeva's work would exhibit a curve - or rather, a straight line - rising at almost a right angle because of her constant effort to raise the pitch a note higher, an idea higher...She always carried everything she has to say to its conceivable and expressible end. In both her poetry and her prose, nothing remains hanging or leaves a feeling of ambivalence. Tsvetaeva is the unique case in which the paramount spiritual experience of an epoch (for us, the sense of ambivalence, of contradictoriness in the nature of human existence) served not as the object of expression but as its means, by which it was transformed into the material of art.
The Russian composer Dmitri Shostakovich composed Six Poems of Marina Tsvetaeva for piano and contralto, making use of poems from her whole career, emphasizing the cyclical character of her work. In 1982 a minor planet was named after her, 3511 Tsvetaeva, by the Soviet astronomer Lyudmila Georgievna Karachkina. Tsvetaeva picture was used for a stamp in the Soviet Union from 1992. In 2003 an opera based on Tsvetaeva's life and work was premiered in New York directed by Anne Bogart and with music by Deborah Drattell. It was called Marina: A Captive Spirit.
Автор: Светлана Кирсанова на 19:49